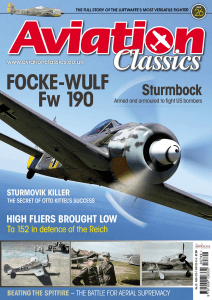 Few aircraft have the ability to radiate menace like the Focke-Wulf Fw 190. Its angular canopy, sharp fuselage, bulging radial-engined nose and heavy weaponry all say ‘threat’ and they do not say it very quietly.

It is difficult to avoid comparisons with its stablemate and rival the Messerschmitt Bf 109 – they were two very different aircraft designed and called upon to do the same job, but the Bf 109 came first.

With its stubby wings, rectangular windows and, at least initially, tail support struts, the Bf 109 is plainly a fighter of the 1930s. While its lightweight design was revolutionary in its day, it still had that prewar propaganda tool look that associated it so closely with the rise of Hitler and his Nazis, and everything that they stood for.

The Fw 190, designed after Focke-Wulf’s Kurt Tank had taken a good long look at the Bf 109 and spoken with its pilots, was a war machine for the 1940s: ruthlessly functional, overtly powerful, technologically advanced, rugged, heavy and armed to the teeth.

Hitler, and the Nazis associated with the Fw 190 – and it is unshakably associated with them – were a different bunch. By the time it reached front line service in any numbers, the self-satisfied posturing and lazy confidence had evaporated.

Tank had a fondness for naming his company’s aircraft after birds and he named the Fw 190 ‘Würger’, the German name for the shrike or ‘butcher bird’, but no-one outside Focke-Wulf seems to have used this name at the time.

It appeared on the front of company brochures of 1942 but the name only seems to have entered truly common usage after the war. The shrike is a Eurasian species that inhabits most of Europe and Asia – perhaps Tank was making a reference to the pan-Eurasian ambitions of the Third Reich when he picked the name.

Whatever the case, the Fw 190 certainly succeeded in menacing the RAF when it first appeared in the skies over Europe. British intelligence had known its name and basic layout for some time but no-one expected the impact it would have.

Even the most advanced Spitfire had met its match and one after another they fell before the Fw 190’s guns. A British intelligence report of 1942 reveals the confusion that reigned during those early encounters. Was this radial-engined fighter that kept appearing a captured French Curtiss Mohawk? Or perhaps a Bloch MB.152? How about a Koolhoven F.K.58? A clipping from a Swedish newspaper is appended to the report, describing the Focke-Wulf 190 as the ‘world’s fastest fighter’. There’s also a grainy photo of the genuine article as seen while diving away from a British bomber.

As the war dragged on and Germany began to suffer reversals and setbacks on every front, the Fw 190 was entering service with more and more Luftwaffe units until it was on a par with the Bf 109.

When the war entered its final phase, Fw 190s formed the last desperate line of aerial defence for the Third Reich. The much-vaunted jets and rocketplanes came far too late and the Fw 190 bore the brunt of the Allies’ final assault.

RAF, USAAF and Soviet fighter unit logs are filled with details of encounters with Fw 190s during the last months of the war. It became a symbol of German defiance and ultimately of defeat.

Today the Fw 190 still looks the part. Its stern features genuinely seem like they were designed to absorb punishment and dish it out in equal measure. And somewhere out of sight, but still not too far away, lies the wreckage of the Third Reich.

I hope this publication serves not to glorify the regime under which the Fw 190 flew in active service but simply to present the facts and tell the story of a remarkable aeroplane and the brave men who flew it.