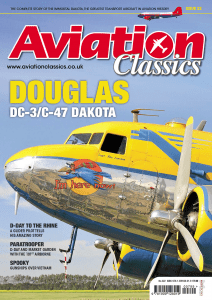 One thing I have learned is that each subject of Aviation Classics presents its own unique difficulties. What is there to say about the DC-3/C-47 that has not already been said many times? I would like to answer that by suggesting that this is an aeroplane with Connections, if I may return to James Burke’s seminal television series of the late 1970s. The series showed that nothing is created in isolation, and nothing is developed in a linear manner.

Despite our need as a species to bring order to the universe, things happen by accident and the connections between people and inventions are complex. Unrelated fragments coalesce for the unlikeliest of reasons to create something new. So it was with Pratt and Whitney, Douglas and the DC-3.

Francis Pratt and Amos Whitney set the standards for accurate measurement and so enabled mass production, therefore becoming largely responsible for the shape of our modern world. Did they see that their attempt to define exactly what an inch was would lead to us all being able to own the same phone, computer or car? No, they were just trying to build machine tools that all of their customers could use.

Their passion for accuracy helped them build an electro-mechanical data processor designed by a man called Herman Hollerith in 1890. This led directly to the creation of the computer, Hollerith’s company later becoming IBM. Thirty years later, Charles Lawrance designed a radial engine so good that the US Navy wanted it in numbers. Frederick Rentschler knew the company he worked for would not produce it, so resigned and approached Pratt and Whitney to develop the concept because he knew of the navy’s interest.

The aircraft engines they went on to produce became some of the most powerful and reliable in aviation history, changing the face of commercial aviation and equipping the military with the right aircraft at exactly the right time. So, mass production, computers, power and reliability in aviation, all directly linking down through time to the DC-3, and that’s just the engine manufacturer.

If you then consider the company formed by Donald Douglas and the men he employed, the list of their connected developments covers the majority of manned atmospheric and space flight. Douglas himself would oversee the development of everything from military aircraft to transports, missiles and rockets, but he began his own company because he liked the climate in California.

The DC-3 is also a case in point. Boeing would not sell its new Model 247 to TWA until its own airline, United, had its order filled. As a result, Jack Frye, TWA’s vice president, convinced Douglas to design the DC-1 then develop the DC-2 to allow his airline to stay competitive.

Slow and uneconomic sleeper airliners then prompted American Airlines’ president Cyrus Smith to insist that Douglas develop a wider version of the DC-2 to fit sleeping berths. The resulting aircraft would become a civil then military legend, the perfect transport for so many uses, yet began from a refusal to sell a different type and the need for fast flying beds. See? History is messy.

To my mind though, the DC-3 is far more than the sum of its parts. Yes, it is fast for its age and able to lift a useful load. It handles extremely well, being smooth, if a little heavy, but at the same time is surprisingly agile. Its structural strength and ability to operate from short rough strips have saved many lives, including my own, and it has done things it was never designed for extremely well.

Its rounded form still graces many airports while more modern types intended as its replacement have long been consigned to the scrapyard. Upgraded and preserved examples will easily see a century of flying, the first aircraft to do so in its original role. Across Asia, Africa, South America, the Arctic and Antarctic, the DC-3 affects many lives every day, its friendly shape presaging the arrival of family, equipment or vitally needed supplies. Considering just how many lives this aircraft has, and continues to touch, its immortality is assured, not just through exploits in war as with so many other types, but through its sheer reliability in peace.

In issue 22 of the Aviation Classics series we recount the history of one of the most important transport aircraft of all time – the Douglas DC-3 / C-47 Dakota.

Once again edited by Tim Callaway, who has a broad aviation pedigree, this issue of Aviation Classics – Douglas DC-3 / C-47 Dakota – will comprise the publication’s now established quality mix of features and photographs. This 132 page glossy A4 perfect bound ‘bookazine’ will:

• Show how the DC-3 was to find fame as a cargo and troop transporter, and as the C-47 and C-53 as a glider tug throughout the Second World War

• Re-visit the first flight on December 17, 1935 when the prototype of what was called the Douglas Sleeper Transport took to the air for the first time… and a legend was born.